They say imitation is the sincerest form of flattery, I have had this picture pinned for quite awhile. 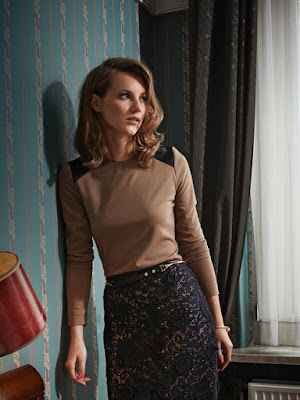 It is from Burdastyle 09/2012.  I managed to find a tan merino jersey at The Fabric Store and found among my remnants a piece of black cotton left over from making my son a shirt.  As the merino jersey is so expensive I was reluctant to cut straight into it so I made a muslin from some viscose I had bought cheaply with a piece of nappa leather for the contrast shoulder yokes.  The only adjustment I made to the muslin was to shorten the length by leaving off the hem allowance from the body of the top and the sleeves.

Sewing the viscose to the nappa leather was not the happiest sewing experience I have ever had but I persevered as I liked the colours and thought I might score a wearable top from this muslin. 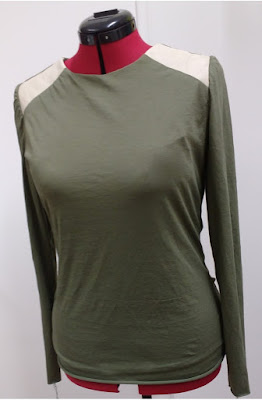 It looks pretty good on Diana and I would have used it but it fit me really badly in the back... The button would do up but the slit bulged with the strain.  There was also pulling at waist level. 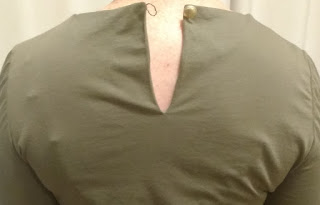 I did a bit of reading on adjusting for a broad back and the recommendation is to adjust at a line from the shoulder down and then put a small dart in at the back shoulder. The books recommend not to adjust at the centre back as it will make the neck opening larger.   I decided to ignore the advice in this case and added my width to the CB by cutting the back piece 1" in from the fold line (and similarly for the back facing piece).  Making the neck opening larger meant that I did not need the back neckline slit with button.  I thought this was quite a win actually.

Thankfully it worked pretty well and this was my end result. 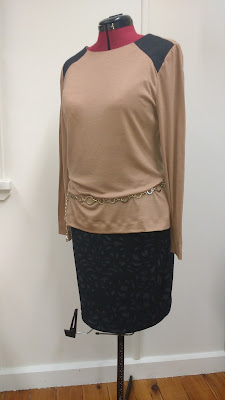 I love the subtle circles in the shoulder yoke fabric... 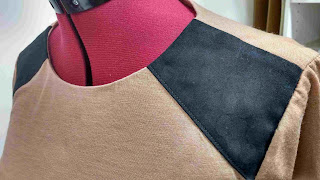 I didn't make the skirt from the same issue but was definitely influenced by it.  I had a beautiful piece of stretch jacquard from the Fabric Collection and had planned to make a Collete Mabel, but ended up making the Stylearc Fay skirt instead after seeing it a few times in Sew Jean Margaret's memeademay posts.

I have only made it once before and hardly ever wear it as I feel it is too long for me. Amazingly I can still fit the skirt as the fabric was a rayon and very stretchy, but I knew I should go up in size as I am not as slim as I was back then.    The Fay skirt has the fabric doubled in it with a bagged hem.  I did not want to double this thicker fabric so I chose my length and folded the pattern at that point.  I cut the pattern with 1" side seams and pegged the bottom of the hem slightly following the lines of the Fay skirt pattern.

I also used my own method of inserting the elastic.  This is such a simple skirt but I really love it.  I think this will be my new TNT stretch pencil skirt pattern.

I really love this outfit but the photos do make me look very crumpled.  The hem on the tee is a bit wavy.  I am  hoping this will settle after it is washed.  Any tips on avoiding the wavy hem would be most appreciated!

I like how it goes with my Jalie vest too... 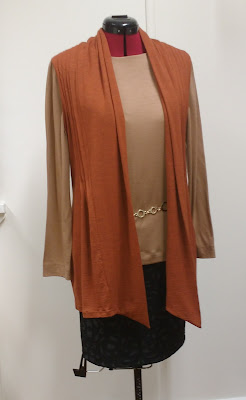 Ciao kittens... I am officially caught up with my current sewing, so we shall see what hits the cutting table next.
Posted by Sue at 3:44 PM 4 comments:

I have made View A of New Look 6150 twice now as I love how it emulates a RTW top I used to own (first version blogged here and second one here.)  However when I was going to put the pattern away I had another look at all the versions and noted that version D is a boat neck and this is a style I love.

I ordered fabric from Knitwit.  It is a viscose spandex blend from Italy called Ravenna.  I must say I am super impressed with this fabric.  A beefier viscose than I have used lately with great recovery and presses well.  Does not seem to crush either.  *Fabric love*

So with no alterations to the pattern, I made view D and once again I am very impressed with the fit. 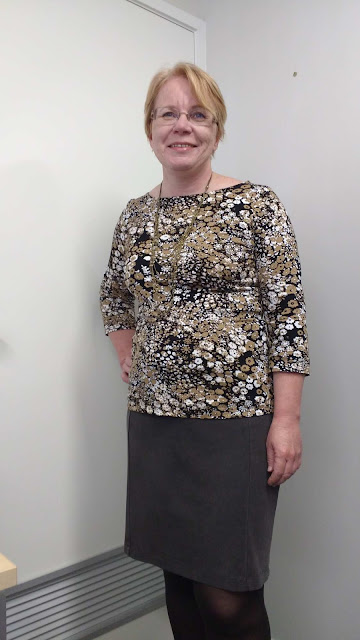 The only changes I made to it were the order of construction.  I sewed the shoulder seams first (with a strip of fusible interfacing on the back shoulder seams for stability), then finished the neckline, then sewed the sleeves in flat and then side/sleeve seams and hemmed.  This is a simple enough tee that this order made the most sense to me.

I think this pattern is going to replace my Burdastyle as my go-to boat neck tee.

I wore it to the office the other day which is where I got the photos but also took some photos of how I wore it out in the cold.  It is shown here with my Mabel skirt, Vogue jacket and crocheted cowl.  Don't you love when all your me-mades come together.

And for a bit of fun last week-end my hubby and I competed in an in-house pairs competition at our local Crossfit box.  We were supposed to dress alike.  So we went as hippies which allowed me to have some fun revisiting my tie dye skills from the 70's!

We did not win any prizes for costume or for placing in the comp, but were super stoked that two old hippies managed to finish 3 WODs (workouts) at a reasonable pace. 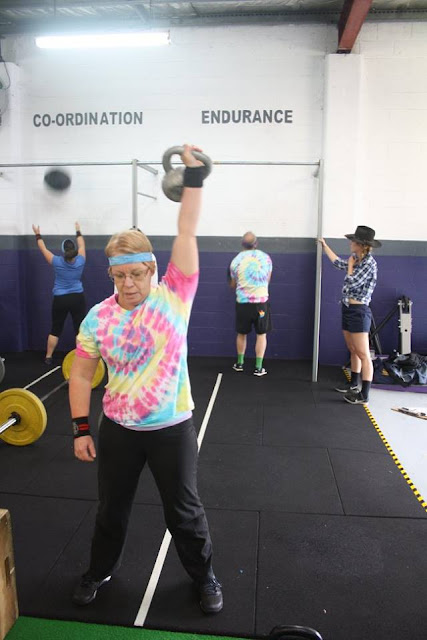 Ciao kittens - one burdastyle top and stylearc skirt to be blogged soon....
Posted by Sue at 5:52 PM 7 comments: 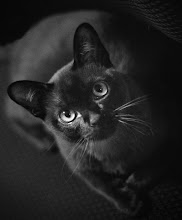 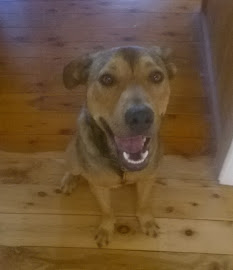